Palestinian prisoners in Israeli prisons have canceled a planned hunger strike later this week with about 1,400 inmates after their demands were met, a Palestinian group said on Wednesday.

Tensions have been high since six inmates staged a dramatic escape from Gilboa Prison with high security in northern Israel on September 6 via a tunnel dug under a sink. Four of them have since been recaptured.

Hundreds of their fellow prisoners were then transferred to other prisons and personal items were confiscated, according to the Palestinian Prisoners’ Club.

The Palestinian Authority’s Commission for Prisoners had announced plans for a hunger strike from Friday.

About 1,380 prisoners – out of more than 4,000 Palestinians in Israeli prisons – were to begin fasting on Friday and be joined by other inmates next week.

On Wednesday, however, the Prisoners’ Club said it had been decided to “suspend the collective hunger strike after the demands were met”, including an “end to the collective punishments.”

A spokesman for the Israel Prison Service said on Wednesday there was no indication that a hunger strike was to begin, but declined to comment on the claim that the prisoners’ demands were met.

Zakaria Zubeidi, a notorious Fatah terrorist who was recaptured after breaking out of Gilboa Prison with five other security prisoners, arrives at a court hearing in Nazareth City Court on September 11, 2021. (David Cohen / Flash90)

Last week, the Palestinian Authority compared Israel’s restrictions on prisoners to “Nazism.” The allegation by the PA, who is regularly accused of torturing inmates, came after Palestinian security prisoners appeared in a number of Israeli prisons and set fire to nine cells in the Ketziot and Ramon prisons in southern Israel. Israeli forces moved to quell the unrest, which was triggered by jailbreak.

The Red Cross has said that Israel has decided to resume visits to prisoners after they were suspended after jailbreak.

Among the Palestinians, the refugees have been widely regarded as “heroes” who managed to free themselves from several life sentences.

The hunt continues for the remaining two prisoners: Iham Kamamji and Munadil Nafiyat, who are both members of the Islamic Jihad terrorist group. 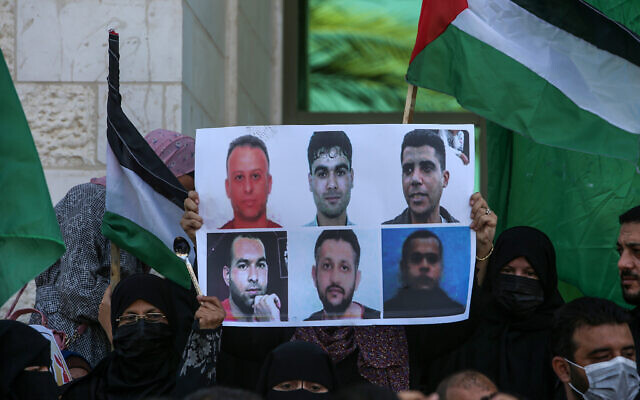 Palestinians attend a rally in solidarity to escape the six Palestinian prisoners from the Israeli prison in Gilboa on September 8, 2021 in Khan Yunis in the southern Gaza Strip. (Abed Rahim Khatib / Flash90)

Kamamji was serving a life sentence at the time of his escape, for killing an 18-year-old Israeli in 2006, a murder he allegedly expressed pride in. Nafayat has not been charged with a crime. He was detained during Israel’s practice of administrative detention, allowing detained suspects without charge. Nevertheless, he has been claimed as a member of Islamic Jihad. Belonging to the terrorist group is illegal under Israeli military law.

The six escaped from Gilboa Prison in the previous hours last Monday, making their way out through their cell drainage system and an empty space under the jail.

The escape revealed a number of failures in the prison, and Minister of Public Security Omer Barlev said last week that he had decided to form a government commission to investigate the incident.

Among the apparent casualties were lack of learning from previous escape attempts and several operational errors, including unmanned watchtowers and sleeping guards.

You’re serious. We appreciate that!

We’re really glad you read x Times of Israel articles in the past month.

That’s why we come to work every day – to give discerning readers like you a must-read mention of Israel and the Jewish world.

So now we have a request. Unlike other news broadcasts, we have not created a payment wall. But since the journalism we do is expensive, we invite readers for whom The Times of Israel has become important in helping to support our work by participating The Times of Israel Community.

For as little as $ 6 a month, you can help support our quality journalism while enjoying The Times of Israel AD-FREE, as well as access to exclusive content available only to Times of Israel Community members.

Pakistan’s Imran Khan says the world should give the Taliban ‘time’ for human rights, but fears ‘chaos’ without help